Driver Swing vs Iron Swing What Is The Difference?

A lot of golfers struggle to hit either their irons or their driver - rarely BOTH. But they are both golf clubs, so what is the big difference between a driver swing vs iron swing?

The core difference between the driver swing and iron swing is angle of attack.

With a golf iron, you want to hit down onto the back of the golf ball to compress it and use the loft of the club to get the ball airborne. A driver swing requires the golfer to hit with an upward angle of attack to give the ball maximum air time off the tee and encourage more carry and distance from the shot. Each golf swing motion has similarities but knowing what they are requires a bit of knowledge and practice. Angle of attack is the main difference between the driver swing and the iron swing. Your swing with both clubs will be pretty much the same, but what does change is the impact position with the golf ball.

Golf irons have more loft on the club head than your driver does. Your pitching wedges has around 46 degrees degrees of loft and your 7-iron around 34 degrees, depending on the club manufacturer.

Loft is what gets the golf ball into the air when you strike it. The golf swing with an iron needs to take advantage of the loft of the club in your hands and this is done by striking down on the back of the ball. We don't want to "scoop" the ball in the air. We want to hit the ball first, then the turf, taking a shallow divot as we go. It sounds simple, but anyone who has played the game of golf will tell you that training your ming and body to trust the loft of the club takes some time.

Here are a few quick pointers on the iron swing and iron shots;

Your driver is a much longer club than your irons and has much less loft. The average golf driver has between 9-12 degrees of loft and because of this, we use a golf tee to help us get the ball airborne.

One of the biggest mistakes I see golfers make with their driver is that they hit down on the ball like an iron. This creates loads of spin and will most likely end up in a slice which doesn't go very far. Driver is probably the only golf club that we want to hit up on the ball with. Don't worry this doesn't mean you're going to top the ball, all you're doing is creating a situation where the ball will be in the air for enough time to maximise distance.

The best shots with a driver are hit with high launch and low spin, and this is a result of a proper attack angle and loft at impact.

Ball Position - Find the low point of your swing 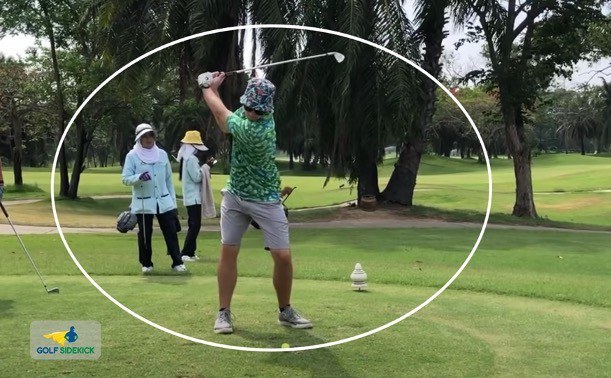 A lot of golfers I play with have no idea where to position the golf ball in their stance for different clubs. Personally, I struggle with my ball position creeping towards my back foot over time and I have to remind myself to check where the ball is regularly.

For driver swings, a good rule is to have the ball teed up just inside your front heel (left foot for a right handed golfer.) This will promote and swing motion which naturally hits up on the ball, creating better launch and spin conditions to encourage long, straight driver shots. If the ball is in the middle of your stance for a driver swing, your natural tendency will be to hit down on the ball which will produce spin. With a low lofted club like a driver, this will more than likely result in a slice.

Your irons are different lengths, so each one will have a slightly different ball position. With long irons (3,4,5), you'll want to have the golf ball forward in your stance - left of centre for a right handed player. For mid irons, the ball position will move an inch or so towards the centre of your stance. For short irons and wedges, right in the middle is a good place to start, but you can move the ball around depending on the type of shot you're trying to play.

The main differences here between a driver swing vs iron swing is the low point we're trying to have. By positioning the ball farther back with your irons, you're swinging descending blow striking the ball first then the turf. Moving the ball around in your stance allows you to decide where the low point of your swing is with each club.

To tackle this we went to the driving range with a roll of duct tape and used this to mark his ball position. The tape was placed behind the ball and if he was consistently scuffing the tape, we knew his low point was too far back for that club. This kind of immediate feedback is great for the amateur golfer, as it makes them feel like they're in control of improving their golf game without having to make big swing changes. Give it a try!

Driver vs Iron Swing - How to drive a golf ball

Hitting a driver sweetly is one of the best feelings in golf. But for many golfers, the driver is their worst golf club and hitting it well remains a mystery.

So what's the secret to a good driver golf swing? I believe that hitting your driver well is about your mindset with that club in hand and managing your expectations.

Do you generate a fast swing speed like a tour pro? You can test the swing speed on a Mevo plus. Do you practice with your driver regularly on the range, on the course or on a Skytrak at home? Often many golfers think they should be hitting their driver 300 yards every time and this just isn't reality. The average driving distance for amateur players is 220 yards. Go easy on yourself!

If your shot shape is a consistent fade, then play it. If you a fighting this every time you have driver in your hands, the results on the golf course aren't going to be good. Accept your shot shape, make it work and manage your expectations.

Now we've covered the mental side of things, let's look at some really basic swing fundamentals for hitting driver.

Set up is really important when making a driver swing. The golf ball should be positioned farther forward in your stance, just off the inside of your front foot.  This creates more tilt in your spine angle and puts your body behind the ball helping you to hit up at impact.

Driver is the longest club in the bag and that requires a longer swing. With a driver it's a good idea helps to rotate your hips away from the target, giving you the feeling that you're coiling up like a spring, ready to unleash some power. Try not to rock or sway onto your back leg, this will create an unbalanced swing which is hard to repeat.

When it's time to start the down swing, all I try to do is rotate. Lots of players get stuck in the downswing and have enough hip rotation to finish their swing. Their upper body gets ahead of the ball and their right shoulder comes "over the top" which creates a downward angle of attack. Hello slice!

Swing plane is defined as the angles that the golf club travel around a player’s body. Most golf teaching pros will teach you that there are two vital swing planes in the golf swing, the shaft plane during address and the shoulder plane during address. Other instructors will show you that there is only one plane in an efficient golf swing and that the hands and club rarely move away from the angle the shaft makes during the address position, the shaft plane. The truth is that most great ball strikers are a hybrid model that encompasses elements of both models.

Matt Kuchar is a common example of a one plane driver swing. He is a tall guy and his swing sees him almost wrap the club around his upper body before uncoiling on the same angle back to the ball. He isn't the longest driver on the PGA tour, but he's very accurate and this could be linked to his consistent swing plane.

Reading about swing styles is a good starting point, but I always recommend seeing a PGA professional for swing advice and lessons. Trust me, it's worth it.

Irons vs Driver - How to hit irons

A good iron swing results in consistent and clean contact with the golf ball.

To make a solid iron swing, your weight should be evenly balanced at set-up. As your irons are shorter clubs than your driver, and because the ball is positioned farther back in your stance, there will be naturally less tilt in your spine.

You need to rotate fully in your iron swing but remember, not that much rotation is needed to hit a short iron compared to a long iron. With irons you're trying to hit the golf ball a specific distance. This sort of control will help you land it near the pin more often.

Drive down and through the ball with your right side (for right hand golfers) for good crisp iron shots and feel like your chest is even with the ball, not falling back.

Controlling your weight throughout your golf swing is incredibly important regardless of what club you are hitting. It looks complicated, but a lot of the movement will come naturally once you have a good grasp of the fundamentals.

The best thing you can do to improve your strike on both the irons and the driver is to practice the movements and hit many many golf balls.

When you practice your irons, try to hit golf balls on grass driving ranges. If you're practicing your driver, use plastic tees, not the rubber ones at the driving range. You want to recreate the golf course and how you actually play the game when you practice.

The best way to get a good feeling of how it feels to hit the center of the club face is to practice your chipping. This will translate into a better crisper strike which will filter up your bag into the irons and woods.

How to hit your irons and other articles