Playing a round of golf should take as long as it needs to. It's a chance to relax in the great outdoors and shoot the breeze with your buddies without worrying about the outside world.

Being able to have a laugh and a joke with your playing partners is great fun, and if the banter is golf related, even better!

So with this in mind, we've pulled together 25 funny golf jokes for you to use when you're next out on the course. If you like knock knock jokes, these are the gags for you. Quick to reel off and guaranteed to get some laughs.

10. Why do golf pros tell you to keep your head down during lessons?

So you can't see them laughing.

11.  What's the difference between a rock climber and a golfer?

12. Did you hear about the two guys that met on the golf course?

It was the beginning of a beautiful friend-chip.

13. What's the difference between a G-spot and a golf ball caught in the rough?

Guys will spend at least 5 minutes looking for a golf ball.

14. Why did the golfer have to change his socks?

Because he had a hole in one.

When you've had a few drinks in the 19th hole, a golf one liner is the perfect way to crack up your buddies. Here are 9 of our favorites.

1. To some golfers, the greatest handicap is the ability to add correctly.

3. Golf balls are like eggs. They're white, they're sold by the dozen, and a week later you have to buy some more.

4. Golf got its name because all of the other four-letter words were taken.

5. In golf, some people tend to get confused with all the numbers… they shoot a “six”, yell “fore” and write “five”.

7. A “gimme” is probably best defined as an agreement between two golfers, neither of whom can putt very well.

8. Golf is a game invented by God to punish people who retire early. 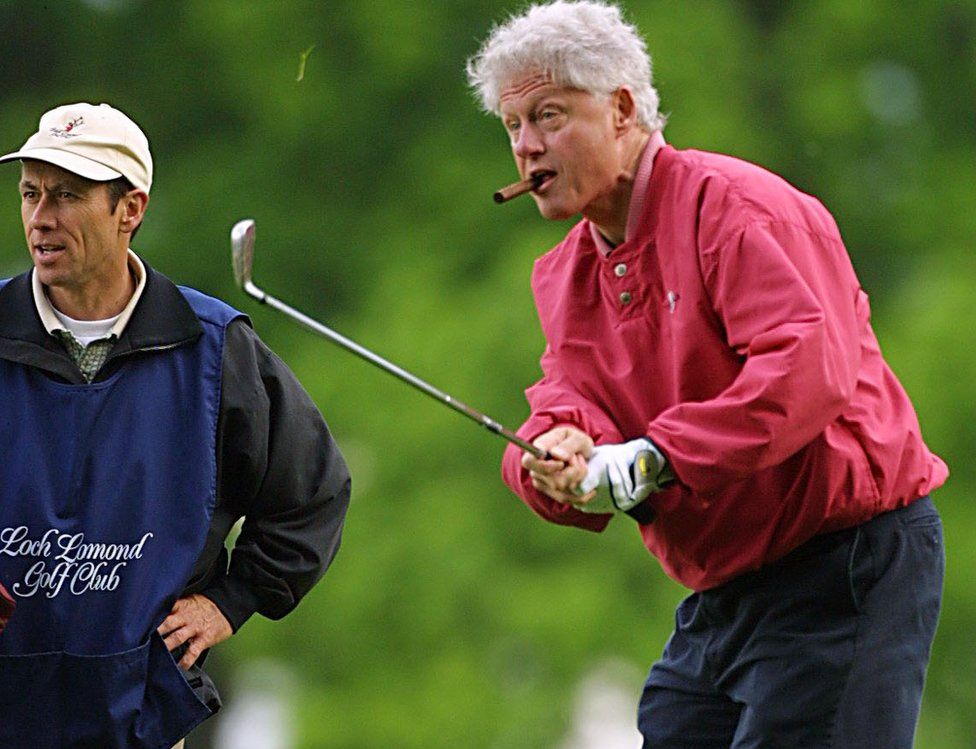 10 Of The Best Lengthy Golf Jokes

If you've got some time to kill between shots, or if you're waiting on the tee, a longer joke is perfect. Make sure you get the delivery right with these as the punch lines are always worth it!

16. A man on holiday finishes his round and walks into the clubhouse.

The head pro says “Did you have a good time out there?”, to which the man replies “Fantastic, thank you.”

“You're welcome,” says the pro. “How did you find the greens?”

“Easy,” said the man. “I just walked to the end of the fairways and there they were.”

17. After a particularly poor round, a golfer spotted a lake as he was walking despondently up to the 18th.

He looked at his caddie and said “I've played so badly all day, I think I'm going to drown myself in that lake.”

The caddie, quick as anything, replied “I'm not sure you could keep your head down that long.”

18. A young man with a few hours to spare one afternoon figures that if he hurries and plays super fast, he can get in nine holes before he has to head home.

As he's about to tee off, an old gentleman shuffles onto the tee and asks if he can join him. Although he's worried this might slow him down, the younger man says, “Of course.”

To his surprise, the old man plays quickly. He doesn't hit the ball very far, but it goes straight. Furthermore, the old man moves along without wasting any time.

When they reach the 9th fairway, the young man is facing a tough shot. A huge tree sits in front of his ball, directly between blocking it from the green. After several minutes of pondering how to hit the shot, the old man says, “You know, when I was your age, I'd hit the ball right over that tree.”

Presented with this challenge, the young man swings hard, connects with the ball, watches it fly into the branches, rattle around, and thud down a foot from where it had started.

“Of course,” says the old man, “when I was your age, that tree was only three feet tall.”

19. One day, Tim is waiting around for ages for his pal John to show up for their usual round of golf.

“You're late on the tee, John.” he says, when he finally arrives.

“Yes, well being a Sunday, I had to toss a coin to see whether I should go to church or go and play golf.” replied John.

20. A golfer slices a ball into a field of chickens, striking one of the hens and killing it instantly. He was understandably upset and immediately went looking for the farmer.

“I'm so sorry,” he said to him. “My terrible tee-shot hit one of your hens and killed it. Can I replace the hen?”

“I don't know about that,” replied the farmer, mulling it over. “How many eggs a day do you lay?”

21. As a couple approaches the altar, the groom tells his wife-to-be, “Honey, I've got something to confess: I'm a golf nut, and every chance I get, I'll be out playing golf!”

“Since we're being honest,” replies the bride, “I have to tell you that I'm a hooker.”

The groom replies, “That's okay, love. You just need to learn to keep your head down and your left arm straight.”

22 A man and his wife walked into a dentist's office.

The man went straight up to the dentist and, “Doctor, I'm in one hell of a hurry! I've got two buddies sitting out in my car waiting for us to go play golf. So don't worry about the anaesthetic, just pull out the tooth and be done with it. I don't have time to wait for the anaesthetic to work!”

Slightly taken aback, the doctor thought to himself, “My goodness, this man must be very brave, asking me to pull out his tooth without using anything to kill the pain.”

So, the dentist asked him, “Which tooth is it, sir?”

The man turned to his wife and said, “Open your mouth, honey, and show the doctor which tooth hurts.”

23. A murder has been committed.

Police are called to an apartment, where they find a man standing with a 5 iron in his hands, looking down at the lifeless body of a woman on the floor.

The detective asks, “Sir, is that your wife?”

“Did you hit her with that golf club?”

“Yes, yes, I did.” The man stifles a sob, drops the club, and puts his hands on his head.

“How many times did you hit her?”

24. A golfer was having a terrible round – 20-over par for the front nine with loads of balls getting lost in the water or rough. As he steadied himself over a 12-inch putt on the 10th, his caddie coughed, causing him to lose the plot.

“You've got to be the worst caddie in the world!” he yelled at him.

“I doubt it,” replied the caddie, dead-pan. “That would be way too much of a coincidence.”

25. A retiree was given a set of golf clubs by one of his co-workers.

Thinking he'd try the game, he asked the local pro for lessons, explaining that he knew nothing whatever about golf.

The pro showed him the stance and swing, then said, “Just hit the ball towards the flag on the first green.”

The novice teed up and whacked the ball straight down the fairway and onto the green, where it stopped just inches from the hole.

“Now what?” the fellow asked the speechless pro. After a pause, the pro finally said, “Erm… you're supposed to hit the ball into the cup.”

“Oh great! NOW you tell me!” said the beginner, in a disgusted tone.

There you go, 25 of the best golf jokes, guaranteed to crack up any obsessed golfer!

If none of these jokes make you're playing partners laugh, either you're not that funny or your game is the joke...